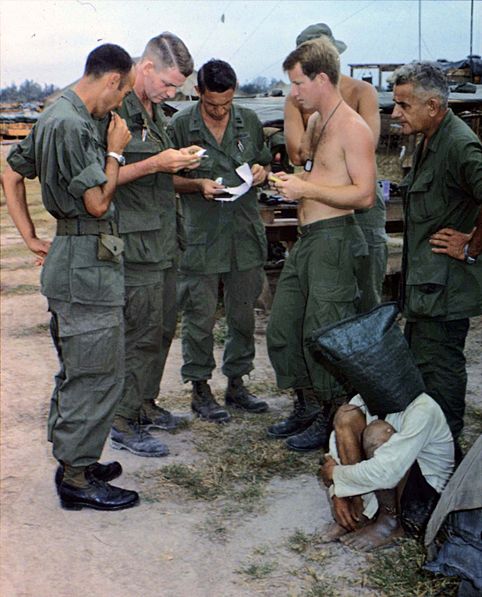 Description: A Viet Cong suspect, captured during an attack on an American outpost near the Cambodian border in South Vietnam, is interrogated.

Before beginning this exercise, students should have a general understanding of the subject and be able to articulate basic answers to the following questions:

What was the Vietnam War?

When did it take place?

Where did it take place?

What were some of the main reasons for the initiation of the conflict?

How and why did the conflict end?

In order to develop a better understanding of the topic and obtain more information on this subject before beginning, please consult the Vietnam War summary on this page.  Otherwise, please proceed to the next tab to begin the exercise.

The Vietnam War began in 1954 with the Battle of Dien Bien Phu between France and  Vietnamese communist insurgents. At the time, Vietnam was a French colony seeking independence. This French loss in battle prompted the signing of the Geneva Peace Accords between the two countries in 1954. The accords called for a temporary partition of Vietnam into the communist north and democratic south, with Hanoi serving as the communist capital, and Saigon becoming the republic capital.

Throughout the 1950s, South Vietnamese leader Ngo Dinh Diem was supported by the U.S. with foreign aid. In 1960, the National Liberation Front (NLF) formed to oppose Diem, in which both communists and non-communists joined together. The ultimate goal of the group was to institute communism in South Vietnam.

A turning point occurred in 1965 when President Johnson authorized the usage of widespread bombing campaigns against the North Vietnamese, causing an increase in the number of troops needed to fight the war. Subsequently, a military draft lottery was instituted in 1969. As casualties on both sides mounted, American public opinion began to oppose the Vietnam War, intensifying during the Nixon administration (1968-1974).

Nixon began the Vietnamization of the war, which called for more aerial bombing campaigns and an increase in the number of South Vietnamese troops in combat. Nixon also moved the war into Cambodia and Laos, causing even more public backlash against the war. These foreign policy maneuvers by Nixon indirectly caused the Kent State shootings to occur during an anti-war protest in 1970, which drew widespread condemnation from students on college campuses across the country.