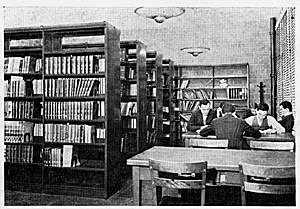 The Engineering Library Circa ​1939 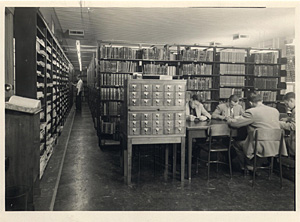 The Engineering Library circa 1940s​

As the 19th century turns a corner, the University of Kentucky Engineering faculty begin collecting supplementary engineering books, housing them in their individual offices.

The University of Kentucky Library begins purchasing engineering books and materials for the College of Engineering.

The Engineering Departmental Collections (Mechanical/Electrical, Mining and Civil Engineering) are being classified and cataloged by the University of Kentucky Library.

In 1938 the engineering departmental collections are centralized into one collection forming the "Engineering Library," located in the Engineering Quadrangle.  The collection retains a "department library" status.

In June 1967, the Engineering Library moves to the 3rd floor of the new Paul Anderson Tower and is named after former College of Engineering Dean, Robert E. Shaver.  A new microfilm reader/printer is purchased - state of the art technology!

Shaver Engineering Library moves to an online catalog and is networked with the University of Kentucky Libraries' system.

Shaver Engineering Library provides the first public access to engineering literature databases on CD-ROM to the College of Engineering faculty, staff, and students. In order to create more space, the library "expands" into the third floor hallway, copy room, and women's rest room to gain 2,218 linear feet of shelving.

Donn Hancher, Associate Dean - College of Engineering, spearheads a campaign funded by the College of Engineering and the Provost to renovate Shaver Engineering Library, transforming the library into a state-of-the-art facility. A new office is built, situating it in a more central location. New study tables, laptop workstations, carrels, and circulation desk are installed. Multi-functional group and collaboration space is built as well as training space.

Lower reference shelving replaces tall shelving providing increased visibility for staff. A new ceiling and lighting plus UV film on the windows provides better study space for students and researchers. In response to student suggestions a new entrance is installed along with improved lighting. A window in the lobby, new carpeting throughout the library and a fresh coat of paint all help create the new ambiance. The current journals section has lower shelving and is now the "Hall of Deans" with portraits of past College of Engineering Deans decorating the walls. Individual study tables line the back corridor and more carrels for researchers are installed in the back hall. The former office space is transitioned into a computer lab/training space.

After a significant number of items are sent to off-site storage, numerous shelving ranges are removed to create more group study space for undergraduate engineering teams, in direct response to the increase in enrollment in the College of Engineering.   Engineering students continue to request more large group study tables and electrical outlets, and in late December UK Libraries funds and installs new tables as well as laptop stations to accommodate computer charging.  Existing soft seating is relocated to what is now know as "The Nook"  which is heavily used. The very busy computer lab/training room is named Zeke's@SEL in honor of its namesake, Robert E. Shaver.

Materials are still being sent to storage so even more seating will be available to students. Fall 2015 will see the largest influx of freshmen engineering students in the history of the college.

An engineering library has been on UK’s campus since the late 19th century when engineering faculty first began collecting materials. Each department purchased its own materials and maintained its own collection.

In 1939, the engineering library was created when all the engineering departments moved into one facility known as Mechanical Hall/Engineering Quadrangle. The new library contained 2,569 books, miscellaneous government documents, university publications, trade bulletins and catalogs, and 83 engineering journals. It had three reading tables with six benches and could accommodate 18 simultaneous “readers.”

Through the years the library was located in several different locations within the Engineering Quadrangle. In July 1948, the library moved to yet another site within the old engineering building, this time overlooking the Quadrangle. In this move the library gained 75% more space and could now accommodate 54 “readers” as well as extra space for staff. The collection grew to approximately 6,300 titles and 195 journals.

In 1967, the library moved to its current location on the third floor in the F. Paul Anderson Tower (FPAT) and is named for former COE Dean, Robert E. Shaver. At that time the engineering library only occupied a portion of that space, sharing the rest of the floor with four classrooms.  In 1972, the library absorbed the classroom space and was carpeted for the first time. Toni Greider, Director - International Programs, UK Libraries, remembers it as “that horrible 70s orange carpeting.”

In the early 1990s, the library underwent a second renovation when it was expanded into the back hallway and bathroom. As space was at a premium, the bathroom was filled with stacks to house the engineering standards collection. Several compact shelving units were also added to the main journals collection.

From 2006-2007 the engineering library underwent a third renovation that addressed student needs by providing flexible collaborative space, joint instructional space/computer lab and special seating for laptop use. The library received a total makeover with a new office, carpeting, lighting, furniture, bathrooms, and window treatments, as well as a new entry.

Louise G. Webb is thought to have been the first engineering librarian at UK. While her starting date is unclear, it is known that she left in 1946.

Mary Frances Pope was the first State Certified Librarian, following Ms. Webb from 1946 to 1949. Her typewritten history of the library provided much of the background presented here. Marjorie Hornsby managed the library from 1949 through 1952, followed by Mildred A. Moore, who was head librarian from 1952 through 1968.