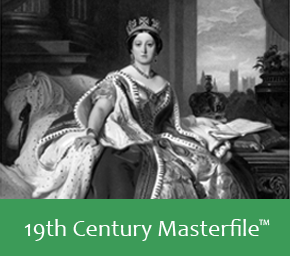 19th Century Masterfile (NCM) contains detailed cumulative index content from over 70 core primary sources. This is a great resource for studies of Anglo-American literature published before 1930 – from periodicals, newspapers, books, patents, image archives, government documents, and more. Examples of some of the covered periodical indexes include:

Started by the Cleveland Public Library, the first volume of this index was published in 1897. It covers 50 periodicals of a general, social, and literary nature, including Popular Science, Cosmopolitan, Century, Harper’s, and Review of Reviews.

The first and only systematic article-level index to the subject matter of 19th century periodicals. When the final volume was released in 1908, the Index had covered 482,000 articles and 378,000 subjects in 12,241 volumes of 479 American and British periodicals for the years 1802-1906.