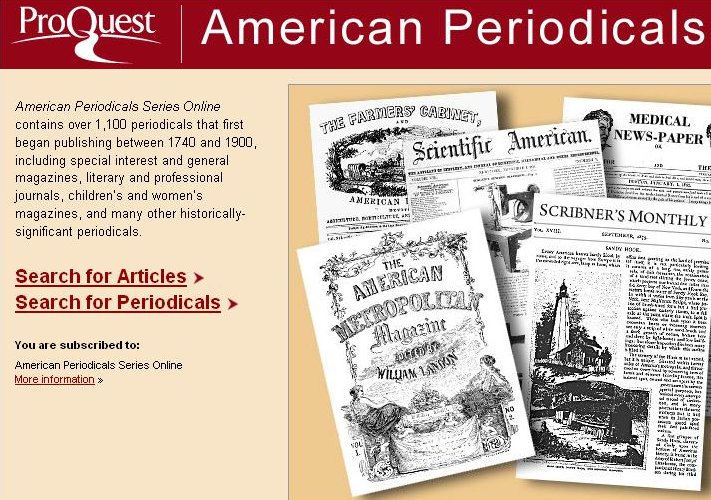 The journals in this collection cover the following distinct 19th century periods:

1800 – 1860: Over 100 periodicals from the golden age of American periodicals, with general interest magazines, children’s publications, and more than 20 journals for women. Many of the publications reflect on the growing debate over slavery, including the serialization of Harriet Beecher Stowe's Uncle Tom’s Cabin in National Era that preceded the novel. Also available are hard-to-find materials, such as Edgar Allan Poe's contributions to the Southern Literary Messenger, as well as the first appearances of Nathaniel Hawthorne's stories in New England Magazine, and Margaret Fuller's contributions to the Dial.

1861 – 1880: 118 periodicals published during the Civil War and Reconstruction eras reflect the nation in turmoil and growth.

1880 – 1900: Over 100 periodicals from these years capture the settling of the West and the emergence of modern America. Early professional journals, including Publications of the American Economic Association and Proceedings of the American Academy of Arts and Sciences, popular titles such as Scribner's and Lippincott’s issued by publishing houses, celebrations of Americana in Ladies’ Home Journal, and the incisive political and social commentary of Puck and McClure’s illustrate the variety of the American experience.