Slasher films are a genre of horror most popular from the late 50s to the early 90s, defined by its use of a generally masked killer harassing and murdering groups of people. The genre and its popular films created many of the tropes we see in horror today, and many franchises have been spawned out of the films.

Thirteen Women (1932) is perhaps the earliest example of what would become a slasher film. It documents eleven (not thirteen, as two women's scenes were cut before theatrical release) women being harassed and murdered after a clairvoyant swami mails them a horoscope foreseeing swift doom.

Thirteen Women can be rented or bought and viewed on Amazon.

Black Christmas (1974) is a Canadian psychological thriller/slasher film, and it is critically important to the slasher genre. Hailed as the first great slasher of its time, it originated many of the tropes that other films would add onto and iconicize, such as the trope of the babysitter not going upstairs and dealing with horror and murder during the holidays. Halloween would be heavily influenced by this film.

Black Christmas can be viewed on Amazon.

A Nightmare on Elm Street

A Nightmare on Elm Street (1984) is a revolutionary slasher of the horror genre, introducing Freddy Krueger to the horror canon. It draws heavily on the themes of sexual promiscuity leading to death that Halloween introduced and also plays with the idea of manifestations of dreams into reality. The film subtly suggests that Krueger is a pedophile, and in earlier iterations of the script, he was, but this was cut in favor of not angering the general public with a depiction of a pedophile.

A Nightmare on Elm Street can be viewed through UK Libraries or viewed on Amazon.

It Follows (2014) is an American supernatural horror film which is not necessarily a slasher but does include many of the tropes present in slasher films. It follows a woman, Jay, who, through sex, is cursed with an entity who will follow her and, if it ever catches her, will kill her. It must be passed on by having a one night stand with someone else, and if it catches that person, it returns to the former. The film plays with the idea of sexuality as a bad thing, not necessarily in the same way prior horror did, but it certainly is commentary on the idea of sexuality being punished.

It Follows can be viewed on Amazon.

Psycho (1960) is perhaps the most famous horror movie of all time, directed by Alfred Hitchcock. It follows a secretary, Marion Crane, who steals money and runs off to a motel to escape with the cash, where her run in with Norman Bates leads to her demise and an investigation sprawls out of it. It's renowned for having a nearly on screen murder, the first of its kind, that chilled audiences everywhere. It also deals with themes of psychoanalysis and the Oedipus complex, something that will become very important to the slasher genre in later years.

Psycho can be viewed through the UK Libraries or rented/purchased and viewed on Amazon. 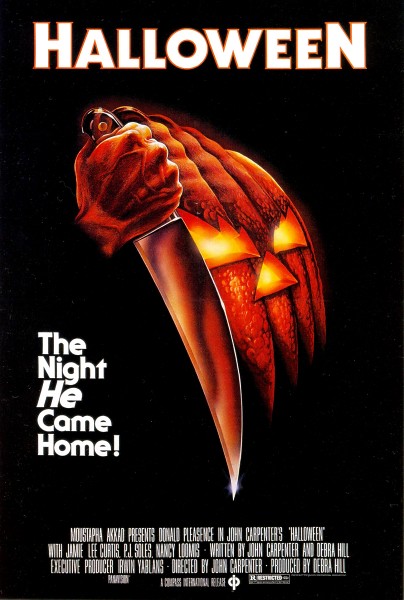 Halloween (1978) is an American slasher film that gave us two of the most important characters to the horror film canon: Michael Myers and Laurie Strode. This is a film that drew on some of the tropes of prior films, like the themes of holidays and the babysitter not going upstairs from Black Christmas, and then took them and created so many more that will become used in nearly every slasher film after. What is most interesting about Halloween is its dealing with the nearly incestuous relationship between Michael and Laurie, with Laurie becoming a mother figure for Michael, and Michael wanting to punish her for that. Also important is the fact that any woman who is sexual within the film dies, while Laurie, the pure virgin and "final girl" (another trope that this film originated) survives because she is chaste. This film created the slasher genre as we know it today.

Halloween can be viewed from the UK Libraries or rented/purchased from Amazon.

Friday the 13th (1980) is the slasher film that originated one of the most famous killers of them all: Jason Vorhees. The film itself is known for being quite gory and disturbing and also for pushing the trope of people being murdered at a summer camp. What is interesting about Friday the 13th is that, despite being known for originating Jason Vorhees, the first film's killer is actually his mother, Pamela Vorhees.

Friday the 13th can be viewed on Amazon.

Scream (1996) is the last great slasher of the genre, directed by Wes Craven. It came after the "golden era" of slashers that brought us things like Halloween and Friday the 13th, but it did revive the genre in a way that many other films failed to do. It called upon many tropes common in horror, such as the masked killer, the phone call, and even the final girl, and it parodied itself in a dark way, not leaning into comedy but absolutely leaning into the common themes and tropes of horror.

Scream can be checked out from UK Libraries or viewed on Amazon.

The Texas Chainsaw Massacre (1974) is an American horror film that terrified audiences of the time. It was massively violent, featuring some of the most gruesome deaths in film history at the time, such as someone being thrown onto a meat hook and left to die and, of course, multiple deaths by chainsaw. It's critically important to the slasher genre because it brought about one of the most important killers in slasher history, Leatherface, and also dealt with themes of cannibalism and safety in where you choose to go.

The Texas Chainsaw Massacre can be viewed from UK Libraries or rented/purchased and viewed on Amazon.

When a Stranger Calls

When a Stranger Calls (1979) is an American psychological thriller film, known for having one of the scariest opening intros in film history. The film drew on the tropes presented in Black Christmas with the babysitter and the phone (based off a popular urban myth), and this opening sequence would go on to inspire the opening scene of Wes Craven's Scream.

When a Stranger Calls can be purchased from Amazon.

Childs Play (1988) is an American slasher film, giving us one of the most unique killers in the genre: a doll. Chucky, a "Good Guy" doll with the soul of a serial killer, is one of the most iconicized murderers in the genre, up there with the likes of Freddy Krueger and Michael Myers. The film is a rather typical cookie cutter slasher, but using a literal possessed doll as your killer is fascinating for the slasher genre and is a callback to prior horror films that used possession as their vessel for horror.

Child's Play can be viewed on Amazon.

I Know What You Did Last Summer

I Know What You Did Last Summer (1997) is an American slasher film. Credited alongside Scream with revitalizing the slasher genre, it is an exploration of "teensploitation" in horror, specifically slashers. The film set up many of the tropes that, along with Scream, would be later parodied in Scary Movie, a parody of slashers itself. The film as a whole sticks to the common tropes of a slasher but with the added effect of the victims all turning against each other, creating even more terror.

I Know What You Did Last Summer can be viewed on Amazon.