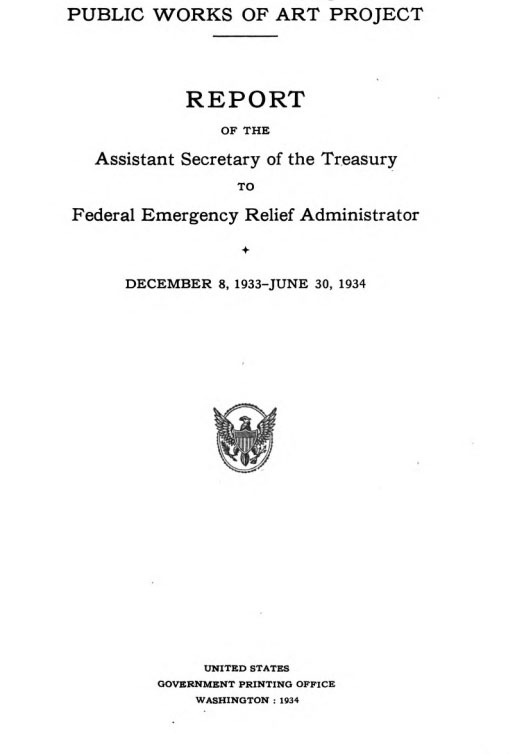 Lexington artists on the Public Works of Art Project payroll included Clyde Foushee, William Frazer, Dick O'Hanlon, Thomas O'Keefe, Joy Pride, and Ann Rice.  The majority of these artists were either current or former UK art students or were connected to the University of Kentucky Department of Art in some way.  Edward Rannells, the chairperson for the Kentucky subcommittee for PWAP, was hired in 1929 to be the UK Art Department head.  Many of these artists also belonged to the Brush and Pencil Club.  UK President Frank L. McVey was also a painter and supporter of the arts.

Exhibition list for "Pictures by Artists of Lexington and Vicinity," February 11-28, 1934" includes many of the PWAP Lexington artists as well as Frank McVey: 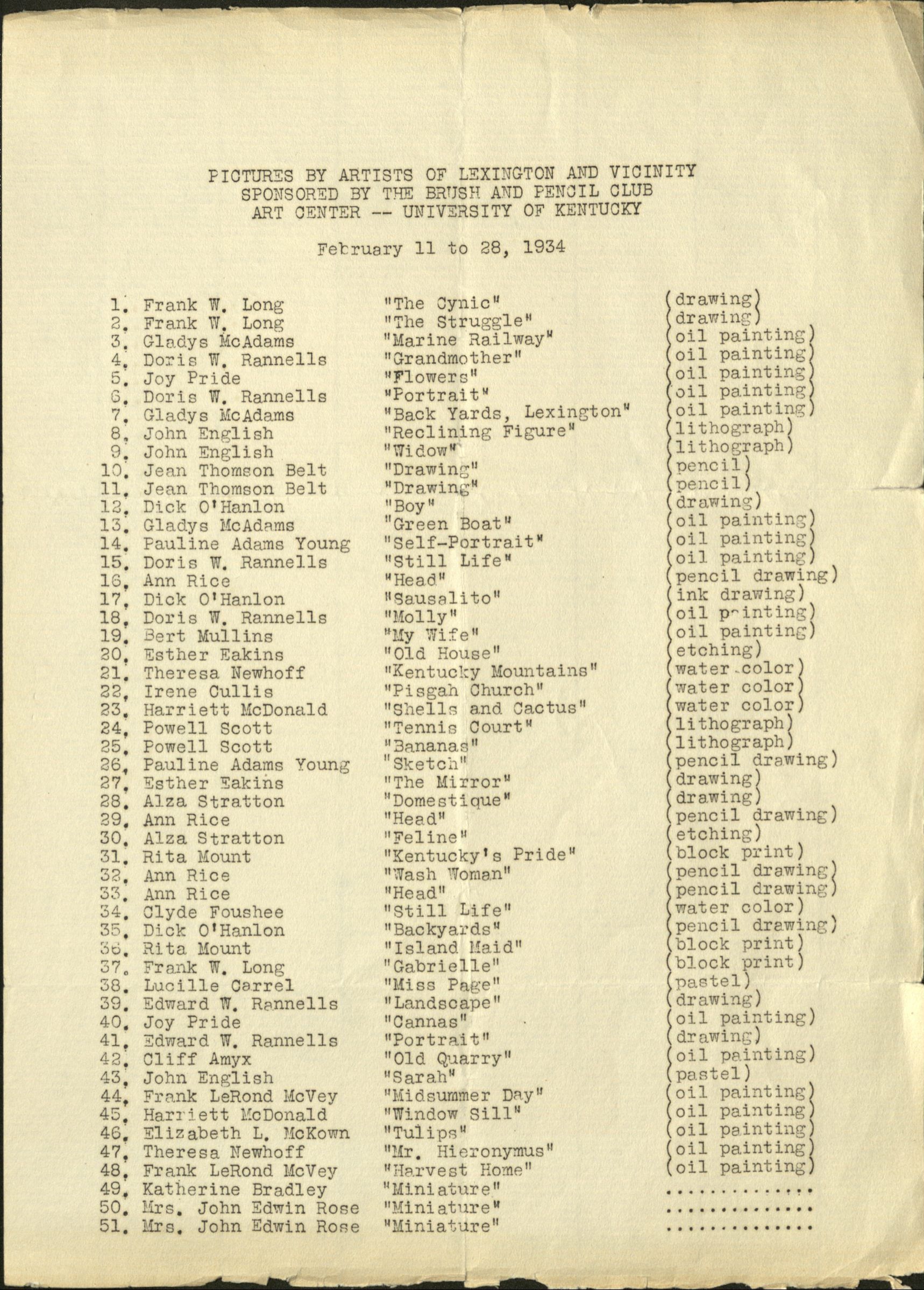 In December of 1933, during the Great Depression, the Public Works of Art Project (PWAP) was established as the first of the U.S. federal government's arts programs. The project was part of the New Deal.

The PWAP was within the Department of the Treasury with funding from the Civil Works Administration. The director was painter Edward Bruce who employed 3,749 artists to "embellish" public property (non-federal buildings and parks) through emphasizing scenes of "America."

The PWAP was created by the administration of U.S. President Franklin D. Roosevelt. The project marked the first time in history a federal government program supported art on a national level. The PWAP was to be the avenue for lifting the American spirit while providing artists with opportunities to serve the country. The PWAP was to last only six months.

More than 10,950 works of art were initiated at a cost of $1,312,177.  Some of the works were controversial.  When the PWAP ended in June of 1934, the projects that had not been completed were continued with state funding from the Federal Emergency Relief Administration and the Works Progress Administration Federal Art Project.

Kentucky was part of PWAP's region 9, which also included Ohio, Indiana, and Michigan.  William Milliken was the regional chairperson and Edward Rannells was the Kentucky subcommittee chairperson.  In Region 9, 161 murals were created out of a total of 967 works.  Twenty-three Kentucky artists participated, of whom two were Ann Rice and Dick O'Hanlon.  Of the 23 artists, 6 were women.  Of the 23 artists, six lived in Lexington.

"Public Works of Art Project (PWAP)." Written by the editors of the Encyclopaedia Britannica. Available Online.

According to the United States General Services Administration (GSA), the Constitution of the United States authorizes Congress to determine who within the Federal Government has authority to dispose of Federal property.  Congress has delegated this authority to the GSA, which has developed regulations for disposal of property.  New Deal artwork (of which art created under the Public Works Art Project program is a part) is considered Federal property and thus must be managed according to GSA regulations.

Specifically, PWAP "works of art executed with the intent that they should occupy a particular place in some public building are to be treated as a part of that building" (p. 4).   "[I]f the artwork is an integral part of the structure (site-specific murals, bas-reliefs and architectural ornamentation) GSA, on behalf of the United States, no longer maintains an ownership interest in the artwork, unless that ownership interest was preserved in the documents transferring custody of the artwork(s).   GSA does request that any institution that has acquired a structure that contains New Deal artwork that is an integral part of the structure, and is preparing to destroy that artwork, contact the GSA Fine Arts Program" (p. 11).