Transcription of artwork information/artist statement in Memorial Hall (bold and italic emphases are from the original plaque):

Gold leaf, acrylic and gouache on canvas, latex on plaster

Karyn Olivier's installation offers a thoughtful and challenging response to the Anne Rice O'Hanlon fresco that has been the center of debate for many years. She has reproduced the mural's African American and Native American figures, and inserted these images into the ceiling of the vestibule, which has been gold-leafed, referencing sacred paintings, churches, and cathedrals from the Byzantine and Renaissance periods.  This effectively transports the "horse carriage driver, a figure in a tree, musicians providing entertainment, four central figures planting, three in the top right corner working the land, two sitting near a pond, several at the train station, and a Native American man wielding a hatchet" into a heavenly space.

Olivier states, "I hope one reading of my use of gold leaf is to elevate the oppressed represented--those who were deemed lowly--to the divine. The imagery in the mural depicts the subjugated performing mundane chores and activities (while neglecting to reveal the servitude and range of horrific acts that kept them there). These figures on the ceiling reinforce the notion or possibility of rebirth--perhaps spiritually, but more importantly through the viewer's reinvestigation, interrogation, and reckoning with our country's complex histories."

The artist acknowledges the architecture and commemorative function of the building and uses a putty-brown color that extends the corner columns, drawing the eyes of visitors upward. Around the base of the dome is a Frederick Douglass quotation:  "There is not a man beneath the canopy of heaven, that does not know that slavery is wrong for him." This text seems to address figures in the original mural as well as Olivier's relocated ones, and the historical sin that slavery represents.

Four portraits of important individuals in Kentucky's history are presented in the circular medallions below the ceiling.  They include Chief Red Bird, a Cherokee who lived among white settlers in Clay county until his murder by two Tennessee men; Charlotte Dupuy, who was an enslaved African American woman who filed a freedom suit in 1829 against her master, Henry Clay, then the country's secretary of state; Peter Durrett, a former slave and preacher who founded First African Baptist Church in Lexington, Kentucky, in 1790; and Georgia Davis Powers, the first African American to serve in the Kentucky Senate, sponsoring bills prohibiting employment discrimination, and sex and age discrimination. Dupuy and Durrett are illustrated as silhouetted heads, a popular way of making portraits before the invention and common use of photography in the 1800s. Between 1500 and 1860, professional and amateur artists would either paint or cut black profiles out of paper.

Witness asks us to slow down and be contemplative in the liminal space of the vestibule. We are prompted to look up and take in the design of the room, the reflective qualities of the ceiling, and several strategically placed figures. What can they tell us about representing aspects of history, place, achievement, power, and pain? How can we use art and dialogue to foster environments of understanding, inclusivity, and acceptance?

Many thanks to Witness collaborator Jay C. Lohmann.

For more information on Karyn Olivier and the making of Witness, go to https://www.uky.edu/president/memorialhall. 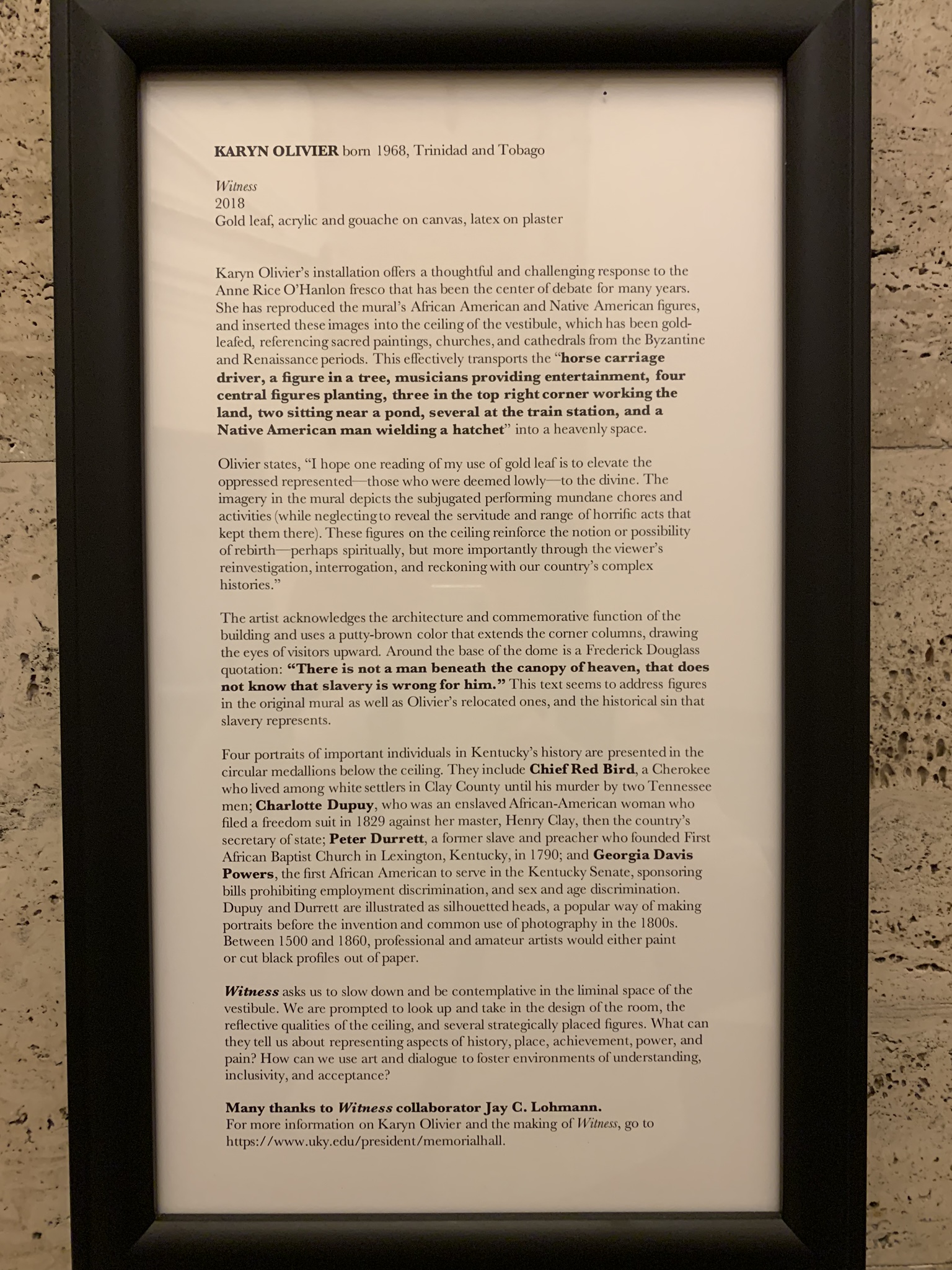