What is avant-garde theatre? on display at the Lucille Caudill Little Fine Arts Library in Fall 2018 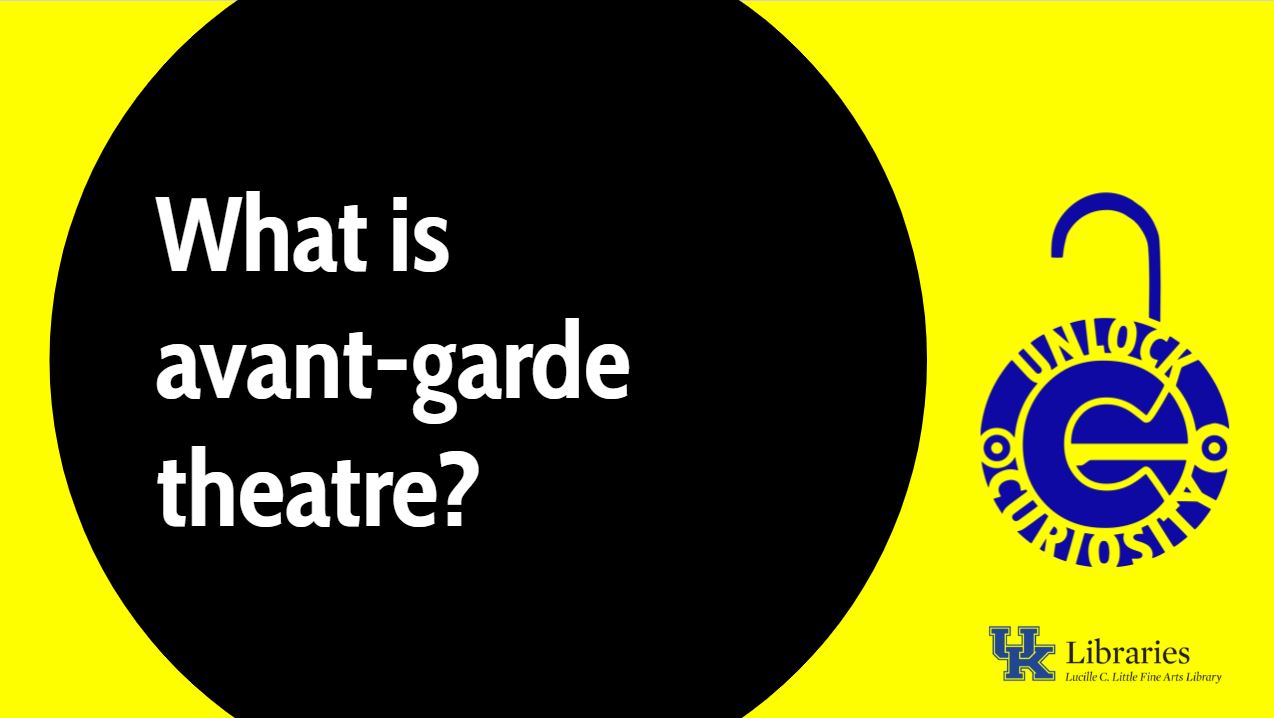 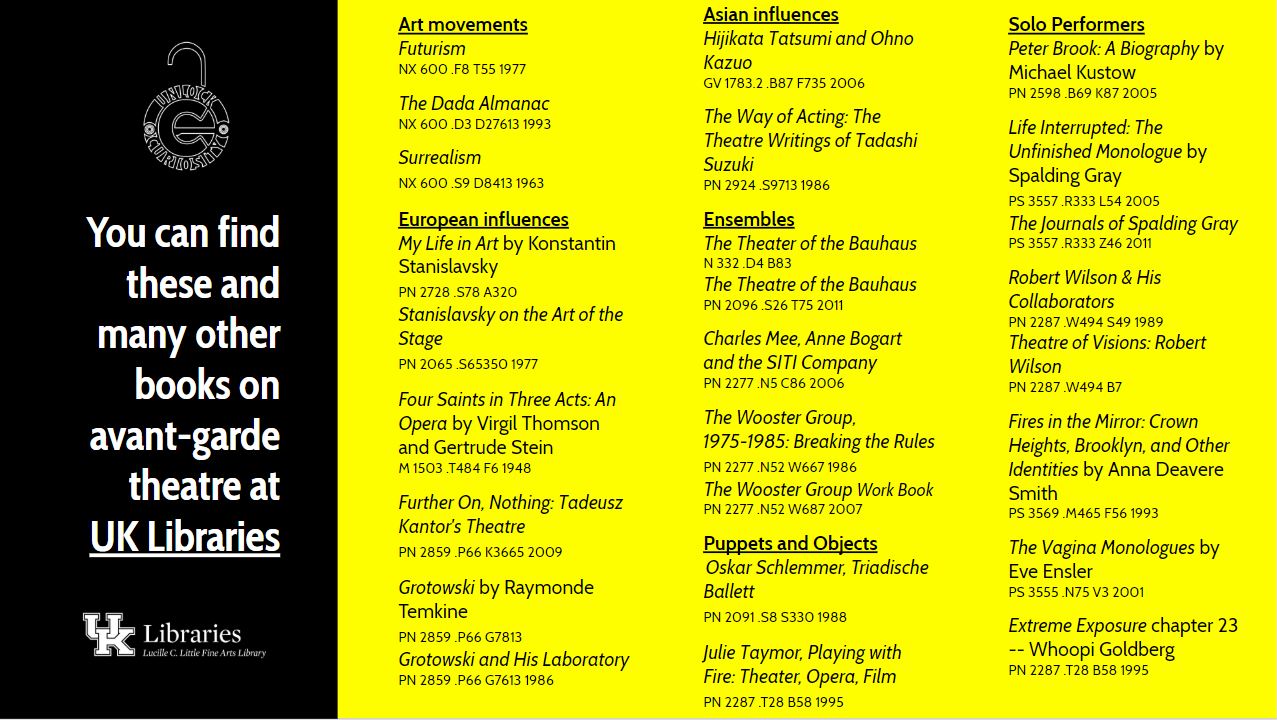 f. 1909: Italian artistic movement led by the poet F. T. Marinetti that rejected artistic and cultural traditions of the past in favour of a technologically oriented future and celebrated absurdity, speed, machines, youth, and violence.

f. 1924: European (mainly French and Spanish) movement in art and literature in the 1920s and 30s launched by André Breton’s “Manifeste du Surréalisme” that sought “imaginative liberation” by breaking boundaries between rationality and irrationality.

1874–1946: American writer who lived in Paris from 1903 and applied principles of fragmentation and simultaneity to theatre in her 77 experimental “plays” and “operas” composed between 1913 and 1946. Four Saints in Three Acts: An Opera by Virgil Thomson and Gertrude Stein

1933–99: Polish director and theorist who studied in Cracow, the Moscow State Institute of Theatre Arts (GITIS), and China, and ran an experimental Laboratory Theatre in Wrocław that toured internationally in the 1960s. Grotowski and His Laboratory

b. 1939: Japanese director who was a leading figure in the 1960s avant-garde theatre in Japan and later became an internationally influential director for his method of training actors.

The Way of Acting: The Theatre Writings of Tadashi Suzuki

f. 1980: American experimental performance ensemble and artists’ collective that was founded by Elizabeth LeCompte and Spalding Gray as an off-shoot of the New York-based Performance Group of the 1970s. b. 1925: English director and filmmaker who has worked with the Royal Shakespeare Company and the National Theatre, known for his experimental work and innovative productions of Shakespeare and the classics.

b. 1941: American director, designer, playwright, performer, and visual artist who is known for his very visual, very long works and collaborations with avant-garde musicians and other artists.

b. 1953: American playwright, performer, and activist who is best known as the author of “The Vagina Monologues,” a feminist play that has been published in 48 languages and performed in over 140 countries.

The Vagina Monologues by Eve Ensler

1888–1943: German artist, director, choreographer, and designer who directed the theatre department of the Bauhaus 1923-29 and is the creator of the “Triadic Ballet,” whose actors disappeared under masks and costumes.

f. 1915: European movement in literature and the visual arts that stressed satire, the absurd, and the importance of the unconscious, creating irreverent art events designed to ridicule civilization and shock a complacent public.

1863–1938: Russian actor, director, and theoretician who co-founded the Moscow Art Theatre (1898) and whose theories later formed a basis for the development of method acting. My Life in Art by Konstantin Stanislavsky Stanislavsky on the Art of the Stage

1915–1990: Polish director, designer, visual artist, and theorist who founded an underground experimental theatre called the Independent Theatre during the Nazi occupation of Poland in the Second World War.

Further On, Nothing: Tadeusz Kantor's Theatre

1928–1986: Japanese dancer and choreographer who was one of the originators of Butoh, an expressionist contemporary dance form which originated in Japan in the late 1950s.

f. 1919: German art school founded by Walter Gropius, originally in Weimar, then active in Dessau (1925–32), Berlin (1932-33), and Chicago that aimed to combine great craftsmanship with modern art and offered a theatre workshop by Oskar Schlemmer.

The Theater of the Bauhaus

The Theatre of the Bauhaus

1941–2004: American actor and monologist who is known for his intense, experimental, and autobiographical monologue programs based on moments and stories in his personal life.

The Journals of Spalding Gray

b. 1950: American actor and playwright who developed a documentary theatre in the 1970s that used journalism and oral history to portray real-life communities in solo performance pieces using the voices of dozens of character sketches.

Fires in the Mirror: Crown Heights, Brooklyn, and Other Identities by Anna Deavere Smith

b. 1952: American director and designer whose eclectic and experimental career has spanned theatre, opera, happenings, and Broadway musicals who studied mask and puppet theatre in Java and Bali in the mid-1970s.